New York, 27 May 2021: The United Nations awarded 8 fallen peacekeepers from Bangladesh posthumously with ‘Dag Hammarskjöld Medal’. Today, at a virtual ceremony on the occasion of the International Day of UN Peacekeepers held in UN headquarters, 129 fallen peacekeepers from 44 nations received this symbol of the ultimate sacrifice who lost their lives while rendering duties in different UN Peacekeeping operations in 2020. Among the 129, eight (08) were Bangladeshi peacekeepers which is highest from any single country this year. This medal commemorates the strength, purity, and fragility of the lives lost in the cause of peace. 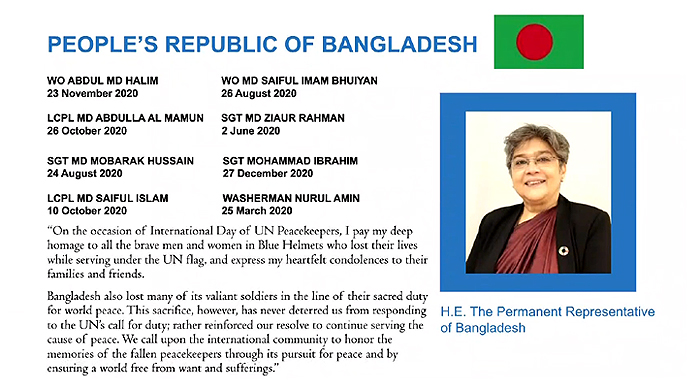 The Permanent Representative of Bangladesh to the United Nations Ambassador Rabab Fatima received the medals on behalf of Bangladesh. The Permanent Mission will make necessary arrangements to send the medals to the family members of the deceased peacekeepers. Defense Advisor of Bangladesh Permanent Mission to the UN Mission also attended this virtual ceremony.
“I pay my deep homage to all the brave men and women in blue helmets who lost their lives while serving under the UN flag, and express my heartfelt condolences to their families and friends” said Ambassador Fatima in a condolence message given on the occasion of the International Day of UN Peacekeepers. She also mentioned that Bangladesh also lost many of its valiant soldiers in the line of their sacred duty for world peace. This sacrifice, however, has never deterred us from responding to the UN’s call for duty; rather reinforced our resolve to continue serving the cause of peace. The PR calls upon the international community to honor the memories of the fallen peacekeepers through its pursuit for peace and by ensuring a world free from want and sufferings.
The medals were virtually awarded by the UN Secretary-General António Guterres in presence of the respective Permanent Representatives of 44 countries at the event to observe the ‘International Day of the UN Peacekeepers’. The theme for this year’s Day is "The road to a lasting peace: Leveraging the power of youth for peace and security." The UN Secretary-General also laid wreath at the Peacekeepers Memorial Site in the North Lawn of the UNHQs in honour of all peacekeepers who have lost their lives while serving under the UN flag over the past seven decades.
Bangladesh is currently the top contributor of uniformed personnel to UN Peacekeeping operations and around 7000 peacekeepers are deployed in 9 peacekeeping missions at this moment. So far, 159 peacekeepers from Bangladesh have lost their lives while serving in the UN peacekeeping operations.
Each year, the United Nations observes the ‘International Day of the UN Peacekeepers’ at the UN headquarters premises. However, due to unprecedented Covid-19 pandemic, the event was held virtually this year.

More News of This Category